NOTE: This article was first written in 2006, so some aspects have been updated to reflect current realities.

Biomembranes is a term I’m borrowing from biology (the structure bounding a cell) to describe the outer skin of future self-sustaining buildings. I have stated elsewhere that I believe that for the built environment – and therefore our societies – to become sustainable, every building and community must deal with its own wastes, generate its own energy and provide nourishment – both physical and emotional – for the occupiers. Only by the creation of truly independant, carbon neutral buildings can we achieve this.

This would be a subtle and far reaching art, not easy to achieve but I believe that the rewards would be many, not to mention necessary. In this respect, the science of biomimicry will play an important part, for example, in developing paint-on polymers that photosynthesize energy, or tensioned fabric five times stronger than steel or kelvar, made with no heat or pollution, just like a spider’s thread. Whilst we haven’t perfected those products yet, let me list some of the benefits we can look to achieve in the near future:

Some of these ideas are becoming well established, such as green (or living) roofs and walls, others are being played with by a few, but as yet, no one is trying to pull all these things together into a cohesive whole system. I am thinking of concepts such as combining vertical greening with greywater filtration, active cooling systems, air purification and algal biofuel from building wastes. I have recently been inspired by the work of the world-renowned architect Ken Yeang (Llewelyn Davies Yeang) based in London and Malaysia. Ken has worked extensively on the concepts of bio-climatic buildings and so his ideas are very close to my heart. Furthermore, one of his main concerns is the organisation of internal space by social structure, rather than by economic return on investment. This very much reminds me of the work of Christopher Alexander (see Pattern Language); despite apparent differences of style, the underlying philosophy is similar, Ken’s work placing it into a modern urban context.

There is a lot to do but the future will need autonomous bio-buildings that take care of themselves without external input, other than sunlight and human organisation. The main challenge is then to retrofit these systems to existing buildings, which will always be the large majority of available building stock.

Meanwhile, take inspiration from the work of Hundertwasser (top right) and Ken Yeang (bottom right). The application of green technology, biological water filtration and the use of every surface to create living, breathing buildings shows that humanity can and will grow up and see beyond the profit line, which so dominates and limits current thinking.

Curiously, I’ve never really written about green roofs, yet they are an important part of the urban greening scene and definitely a part of my “building biomembrane” concept.  Perhaps it’s because the subject is so well covered by the commercial sector and various organisations; far better than green walls but then, they have a twenty year head start.

And twenty years ago, I was putting green roofs into some of the landscapes I designed and built.  Here’s one in my own garden, on a wood store:  the one at the back is an 18 year old turf roof, with soil and grasses, such as was common in those days.  There’s a lot of Sedums, Sempervivum, bulbs etc that have been added over the years, or found their own way there.  The roof to the front is about two weeks old, consisting mostly of Sedum album, which was growing prolifically in a graveled part of my garden where I didn’t want it.  I put a layer of soil and compost under it and slapped the darn stuff down! 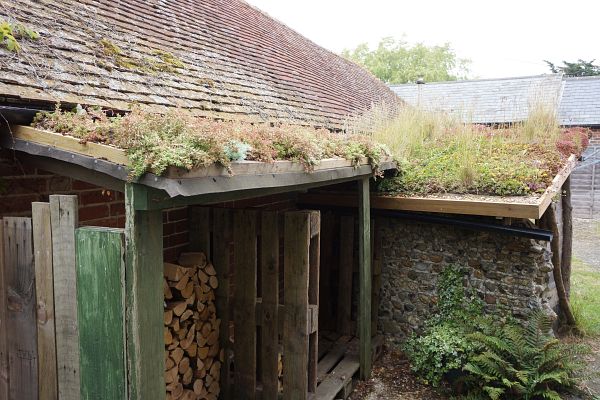 I also have another Sedum/succulent roof over my porch, which is much more akin to a modern extensive green roof, with a mix of compost and expanded clay pellets (ie lightweight aggregate). It is much less prolific and to my mind, less successful therefore.  I used to be quite adept at building hobbit-like turf-roofed garden structures from chestnut and reclaimed timber, such as this one, built for a show: 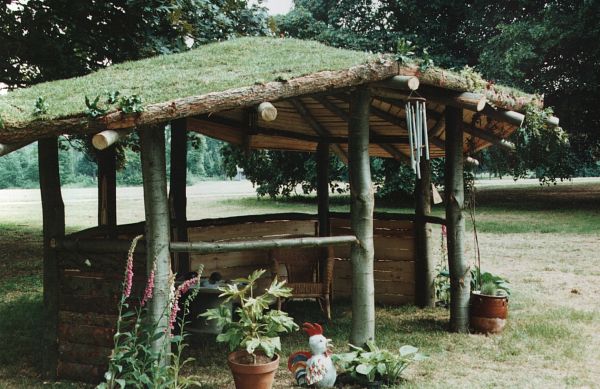 These days I like to do rustic with a contemporary feel, such as my current summerhouse, which I built last year. It doesn’t have a green roof, simply because it faces away from us so we’d never see it. It’s insulated and timber-lined inside, so stays fairly warm with a little help. The windows all came from a house up the road, so fitting my desire for recycling. Double-glazed too… 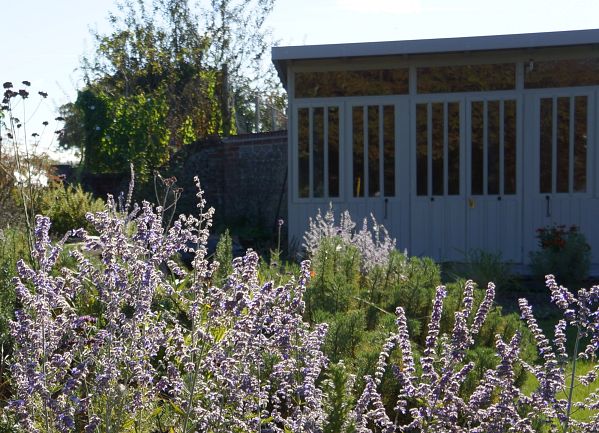 Of course, the best kind of green roofs are the ones you can use as garden or green space. I’m designing one right now which overlooks the Thames; an early concept modeled below. I’ll put more up on this as things progress… 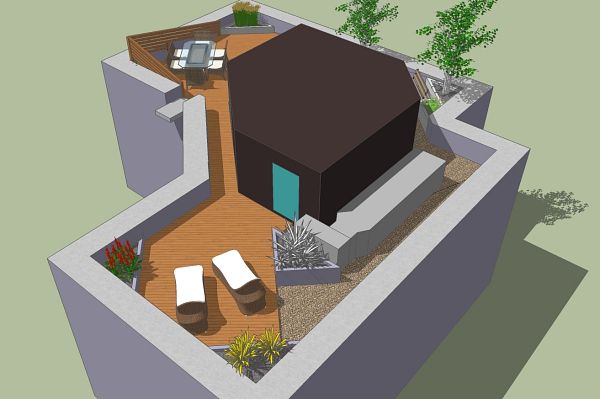