Arboriculture in the UAE

Last winter I did some interesting work in Abu Dhabi, concerning the care of trees.  I can’t name one of the projects (a royal palace), but one was Mushrif Central Park undergoing a major redevelopment (and now reopened – March 2015).  In both places I undertook a survey of 100+ broadleaf trees (as opposed to palms), assessed their condition and trained staff in basic arboricultural pruning techniques.  Such information is lacking out there as most such trees, with the exception of things like ghaf (Proposis cineraria) and acacia (A. tortilis) are imported from abroad, so knowledge of the necessary arboricultural techniques of pruning, especially of broadleaf trees, is generally absent (palms they are well used to dealing with).

As you can see in the pics, the trees in the park had been “salvaged”, which is perhaps not a good word. A specialist tree-lifting company from the US had been engaged to train ground staff in the techniques of boxing and lifting the trees, no easy task in a pure sand soil and 35-40degC – and that’s the winter temperatures. I then had to attend to the care and aesthetics of the tree.  My assessment was that most of the trees had been badly pruned in the past, causing poor crown developments and in some cases allowing disease to enter. 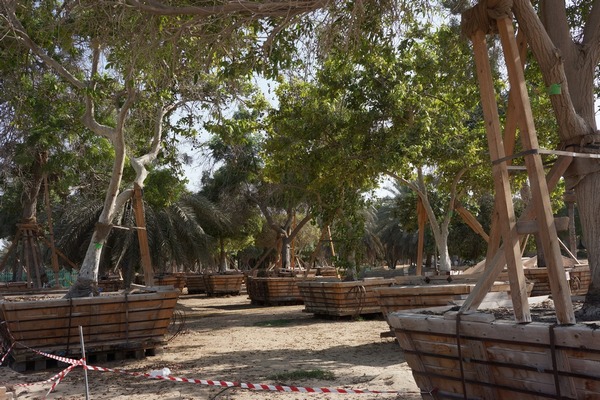 Not surprisingly, some of the trees suffered severe shock in being lifted, but most survived, with varying degrees of die-back and then regrowth. Much of the work was simply about deadwooding and the teaching of correct pruning cuts and methods. Access is always the main issue and there was no way to teach the guys how to climb – that is a job for a specialist training school, so we were restricted to a cherry-picker and for the most part, hand tools. 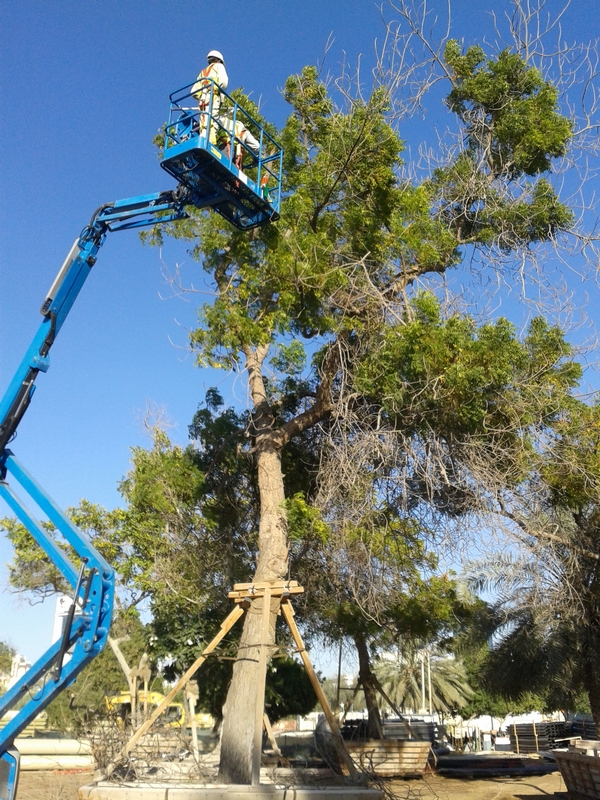 Many trees suffer, surprisingly perhaps, from over-irrigation. This causes surface rooting which makes trees dependent upon continued irrigation, plus natives like ghaf become prone to wind-throw from lack of deep anchor roots. Exotic trees such as Delonix (below), grown for their beautiful red or yellow flowers, bloom less well when over-watered and become prone to bacterial wetwood infection. 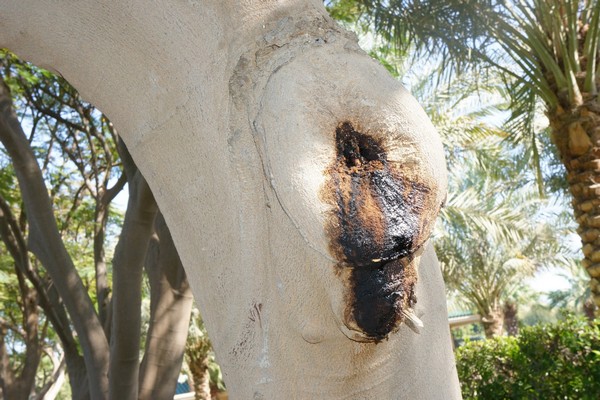 Places like Dubai and Abu Dhabi are developing at an astonishing speed and their landscapes are growing at a similar rate. Knowledge is the thing that lags behind, and it will take some time for this to catch up. I’m sure it will; there is something alluring about creating beautiful landscapes in a naturally hostile climate. This becomes a critical issue in the light of climate change and global urbanization, which is happening fastest in the hotter regions of the world; landscapes moderate climate and make such places livable, whilst biophilia demands that we need close contact with greenery in this urbanised world.

More needs to be done to increase the knowledge and care of trees, including species selection and nursery practice, reducing over-irrigation and teaching good pruning methods, but it can be done. I’m looking forward to the next phase.