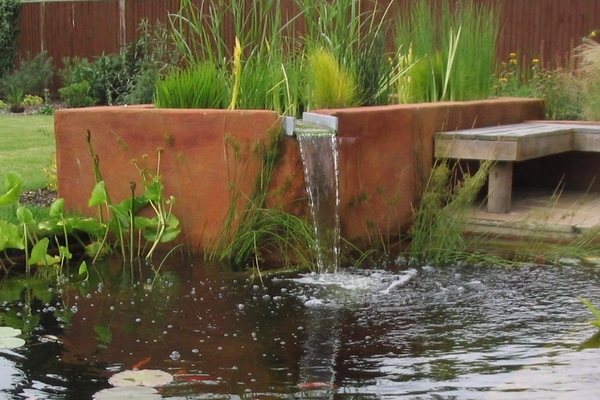 The maintenance of ponds is the one thing that people seem to be the most uncertain about – it seems shrouded in myth and confusion.

Some of this is basic ignorance of simple biological structures but this is enhanced, in my view, by the profession’s over-mechanised solutions to obtaining clear water. There is also a tendency to think that a bottle of some substance can perform miracles and solve unclean water problems – but it can’t.

First lets be clear (pun intended) there is a difference between clean and clear water. A pond’s biological functioning might be quite happy with water that is healthy but carries an amount of suspended solids. The health of water is far more dependent upon keeping levels of Nitrites, Nitrates and Ammonia low; these have nothing to do with water clarity.

Our aesthetic taste demands clear water, however, and it is certainly true that pure, clean water is always the most beautiful to behold.

To obtain and keep clean and clear water, we must keep the pond in balance, so a simple understanding of water balance is useful. This involves two things; mechanical filtration to remove solids, and bacterial action to remove pollutants.

A filter box gives some mechanical filtration of solids and creates a home for micro organisms to do their work. It is these bacteria that convert Ammonia into Nitrites then into Nitrates, and they are naturally existing in any aquatic ecosystem. Thus it is not the filter box that does the majority of the work but bacteria already present in the pond.

An Ultra Violet filter kills algae, which cause green water. Algae feed on nutrients available in the water – remove the nutrients and you solve the problem at source. This may be an oversimplification, but it is fundamentally true. A UV filter is therefore treating the symptoms, not the cause.

I have rarely found a situation where tests have told me anything that my eye has not. That’s not to say that tests do not have their uses but I would suggest that you can observe when a system is out of sorts. Nature is incredibly good at correcting imbalances, given a chance.

Ponds are an open system and will always lose water through evaporation, so some new water is always going to be added via the garden hose or a top-up system, preferably from harvested rainfall. Water change regimes are quite unnecessary and probably unhelpful to establishing a balanced system, which has to start again each time this is done.

It is true, however, that small garden ponds are often unstable in terms of quarter quality, for the following reasons:

All this adds up to one thing: excessive nutrients in water, leading to algae growth, lack of oxygen, cloudy water – in the end this leads to eutrophication.

You have to remember that the average sized garden pond is a mere puddle in Nature’s terms. Ponds of that size would likely be impermanent and support little life, other than in a temporary or cyclical manner. In summer a small pond would dry up unless it were fed by a stream or high water table. If it were fed by a stream, then the pond wouldn’t be a pond – it would be a bulge in the water course.

We must accept, then, that the garden pond is a highly artificial environment, which needs some help in order to remain attractive to us, and to its inhabitants. What form should that help take? Where space is severely restricted, a filter box may be the answer, for it crams a lot of bacterial housing into a small space.

The same can be done, however, by the use of natural biological filtration, which is designed to be an attractive feature of the water garden itself, rather than a utilitarian box than must be hidden. In its simplest form, this can be no more than a gravel filter bed built into a stream which feeds the pond. Planted with suitable aquatic plants, this can be a major feature and is also good where hungry fish tend to devour plants placed in the main pond.

How big should such a feature be? Natural filtration is an inexact science, so the bigger, the better. A surface area of one quarter to one third of the pond surface area is a good guide. A more intensive system uses a vertical, rather than horizontal flow. These have a much higher cleansing rate and so can be made smaller, thus saving space. However, they are somewhat more complicated to construct. These operate on a similar principle to the plastic filter box but again, they have a huge aesthetic advantage.

I have hardly scratched the surface of this fascinating subject, but the main point is that you are helping Nature to do what she does already, rather than taking control with technology.

Water in its purest form is the most simple of compounds – two atoms of hydrogen to one of oxygen – yet it is possibly one of the least understood “elements” on this planet. Strange, when it covers 70% of the globe and our bodies are 70% water. We take it for granted now, when once we considered it sacred. There is little appreciation of water; we no longer walk to the well, there is no effort involved and seemingly no end to its availability – except there is, but that’s not what this article is about.

I want to try and inspire a deeper appreciation of this element (not used to describe its chemical properties, for it is, as stated above, a compound), we need to reconnect with it as the source of life and spirit. I’ve worked with water for many years, building ponds and experimenting with biofilters and natural cleansing methods. I work intuitively, not scientifically and am the first to admit to large gaps in my knowledge, with a path of learning ahead of me that still looks impossibly steep! Yet the more you explore the qualities of water, the more you get drawn in: the secret of life itself lies in there. To that end, I have recently gone back to building new water features and greywater systems myself, for there is no substitution for hands-on experience and observation.

That water has properties “beyond the obvious” is a no-brainer – you can observe many of these for yourself. Understanding what exactly they are, how they are generated or destroyed, and just how far they go, is another matter altogether. You cannot investigate water for long without coming across the name of “Viktor Schauberger” an Austrian forester who investigated/discovered/rediscovered the more mystical properties of water during the first half of the 20th centaury.

So where do we begin, on a journey to a greater understanding of water? That’s difficult, but let’s start with what we can see: the way that water moves. Our mathematical minds tell us that the quickest way from A to B is in a straight line, but water doesn’t move like that, even when it could (in fact, nothing in nature does). Water moves in a never-ending series of spirals and vortices. Why? because that way water is energised; it generates or attracts minute electrical charges and controls it’s temperature, moving as close to the optimum of 4° C, when it is at its most dense (it expands either side of this point). This vortical movement causes the winding motion that we see in rivers once they reach the valley bottoms and plains, and the eddies and swirls you can plainly see in any moving body of water.

Vortical movement is centripetal, rather than centrifugal. It uses the force of implosion, rather than explosion. This form of movement gathers force and energy, rather than dissipating it outwards. Straight away this seems odd to us, for we are used to a science and technology based solely on the force of the centrifugal, explosive, dissipative; which inevitably must lead to loss and entropy. That Nature uses a different form of energy seems unreasonable to the scientific mind. It has been said that there is endless energy that can be captured from the movement of water (not from hydro-electric use) and if we could efficiently split water into oxygen and hydrogen by electrolysis then we could capture energy with water as the only emissions; but I do know that the way that water moves is strongly bound up with its health, and so the health of all life, and that is an area that interests me greatly.

Schauberger states that water tries to maintain itself at its greatest density of 4°C; then it has greatest energy and the water is at its most “enlivened” state. The problem with this is that it is difficult to measure or assess by conventional scientific means; this does not mean, however, that it is cannot be true. What we can say, however, is that water in its most natural state is the most healthy, and so at its best for both ourselves and the environment.

Water may also carries memory, which accounts for whether it is in an “enlivened” state or not. In homeopathy, a benign substance is diluted to the point where it is chemically nonexistent, but potentially very active, and this is based upon the latent memory of water. This is also true of pollutants, whose influence can still be there even once the source has been removed. Fortunately, water will self-heal if only allowed to move in its natural rhythms. The design of Flowforms is one response to this, allowing water to regain it’s own energizing movement, and other devices, such as spiralled copper coils and units containing pre-energised water are all said to effect and energise water that flows past them. I have no particular view about this, but then, I haven’t done any tests on such devises and of course, knowing how to measure potential results is always the problem. In pond ecosystems, health can be largely determined through observation and I prefer this approach, where the results of alteration can be seen in biological response.

There are a number of issues I have experimented with at times: enhancing the natural rhythms of water movement, enhancing biological activity in breaking down pollutants, and incorporating ornamental pond systems with purification of household greywater discharge, rainwater harvesting and garden irrigation. All these things require biological understanding and observation but to my mind, they most of all require an open mind and a sense of respect, an acknowledgement that water is in fact precious and scared.

I live in an area surrounded by intensive agriculture, which extracts groundwater to irrigate vast monocultures of salad crops. This is the worst kind of abuse of water, treating it as an inexhaustible utility, to pollute with herbicides, insecticides and fertiliser runoff. Mankind’s ignorance and lack of respect for the most fundamental and vital element on this planet can only lead to exhaustion, depletion and pollution on such a scale that the very existence of all life is put under threat. We need to look for the highest potential of life, not the lowest common denominator. Time to get critical in our thinking, and get connected back to deeper understandings.

The most exciting thing is that understanding water truly can reveal the secrets of life. Through appreciating this simplest, yet most profound element, I believe that humankind can come to a greater appreciation of himself, and his place in the Universe.

All for a cupful of water.