When Green Walls get Greenwashed…

Reporters always have to grab a headline, so I shouldn’t have been surprised when the new green wall near Victoria station started grabbing headlines such as “London’s largest living wall prevents flooding”.  It’s a misleading headline to say the least: A, it’s not the largest wall, that “accolade” (if size is all that counts) belongs to Patrick Blanc for his wall at Leamouth Peninsular, constructed by Biotecture in 2009 and B, it doesn’t prevent flooding.  How could it?  Striding about, with a big umbrella?  No, it has rainwater harvesting – as can any building, regardless of whether or not they have green walls (although they then have to have some use for it, such as flushing toilets), and that helps absorb water and delay rainfall from contributing to stormwater runoff.  It may directly capture a small amount on the surface of the wall, but not much. 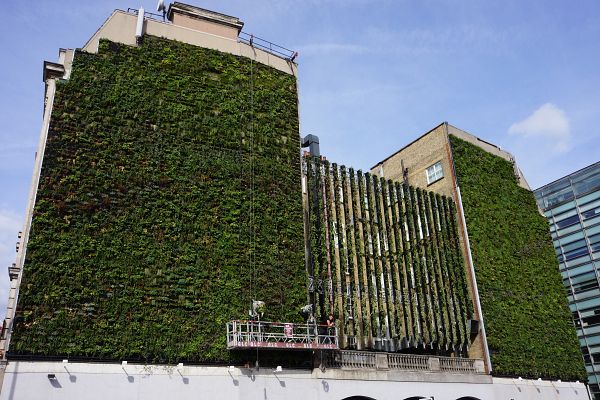 Now don’t get me wrong; this is a lovely green wall and most welcome.  I know all the guys involved and they’re all genuine people. The wall will have many environmental benefits. No, what bothers me is the way the press grab shallow headlines that reduce the very real benefits to glib catchphrases, often completely divorced from meaningful context .  Of course rainwater harvesting reduces the risk of flooding, but one small scheme in a large area will have negligible benefit (just as the Edgware Road wall I designed for TfL will, on it’s own, have a negligible effect on air pollution); unless many buildings in that area follow suit and harvest rainwater, the impact will not be felt.

What walls such as this do, is pioneer and display the possibilities of what we may do and the potential outcome if we do enough of it.  But the current attitude is, right, we’ve put up a green wall/green roof/planted trees, so job done, environment’s sorted… it’s just so NOT.

Right now i’m frustrated by this attitude.  For example, it seems that government, having done their bit (on air pollution, mentioned above), now have no monies in the “clean air fund” to take things to the next level; where we so urgently need to be going. The simple reality is that a lot more testing is needed, more system trials; ways need to be found to effect a large-scale roll out of affordable greening (a major criticism is that the technology is too expensive).  If the government won’t make funds available to do this, even in the face of massive EU fines for breaching air quality standards, then who will?  So the Edgware Road green wall becomes just another political chess piece, used then forgotten once it’s done it’s short-term bit of marketing.

It’s time that as a society, we grew up, stopped living off of vacuous soundbites and got to grips with our environmental issues.  One headline I got from a talk I gave last year, was “designer calls for environmental efforts to be put on a war footing”.  Another bit of melodrama, but I did use the phrase, and meant it.  Only with that level of serious intent and commitment can we get to make meaningful progress on adapting our societies to the incoming effects of now unstoppable climate change.

Time to get real…