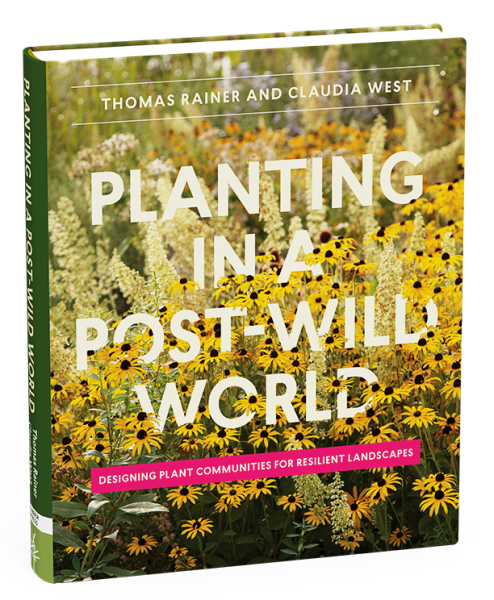 This review first appeared in Thinking Gardens in February 2016.

This book represents a new wave of thinking about “natural” planting that has been emerging in recent years; actually it has been developing for the last thirty or more years but like all new things, they tend to follow an exponential growth curve. I’d say that right now we’re near the base of the steep upward bit with this one. Left unchecked, exponential growth tends to end in collapse but this idea deserves to stay the course. To do that it has to translate from a style into a design language and that’s what this book is really about.

This is a very US-centric book, unsurprising since Thomas Rainer is from Alabama and Claudia West, though of East German origin, lives in the US. I would have liked her influence to have given the book a more European feel; it would have been richer for it and more globally relevant.

The book has already been reviewed on TG by James Golden but although I’ve read this I’m not referring to it, save for one point. Needless to say, that review is also very US-centric; my purpose is to give a more UK/European viewpoint.

The thinking in this book is very design-led, in which the authors refer to landscape archetypes, which I think is very useful. However, they only select three – grasslands, wood and shrubland and forest. Given the vastness and variety of American climate types (which has just about everything), I’m surprised they didn’t mention desert landscapes, arid-mountainous or Mediterranean (as in Californian coastal regions); I suspect they have simply not worked with these climates, yet to omit them from a listing of archetypes is limiting. It is clear too, that their interest lies mostly in the grassland or prairie archetype.

Referring back to the JG review, he wanted to add another archetype, Edges. I would argue that the wood and shrubland archetype is an edge, or rather a transition. Only in farmer’s fields do we have an edge as such. I would think of these archetypes as parts of a sine wave, one transitioning into another as climate and topography dictate. This sine wave also rolls around the globe over time, one archetype superseding another in any given place. Remember that the Sahara desert was woodland just 10,000 years ago, when we emerged from the last ice-age. This fits with the theory that there is no such thing as an ecological climax.

Another interesting thing to come out of this book is the idea of “designed plant communities”. You could say that any grouping of plants together is a designed community but the context they use of grouping plants by habitat-type rather than just their visual look is refreshing. This makes good sense, provided that such a designed grouping is appropriate within its wider environmental context. Taken to its logical extreme, however, you end up with native plants only.

What may be harder to work out is how much of this philosophy fits into a garden. Even the largest garden can’t fit in a whole wood, let alone a prairie, so of course, we must work by inference. This aspect of things is not really discussed in the book and most of the pictures are of large gardens in amazing settings; domains of the lucky few who we landscape designers occasionally get to work for. Yet for the majority of small garden owners, instruction for the adaptation of these principles is missing.

I feel that the book only really looks at one archetype, that of New Perennial/Prairie style gardens and there is a big focus on this at the moment. I might compare this book with Oudolf & Kingsburys “Planting, a New Perspective”. That book, whilst not getting down to the archetypal design level, is more European in focus, so possibly a good companion read. Yet it too, mostly deals with perennial-based planting, as you would expect from these gents. The work of Nigel Dunnett and James Hitchmough comes to mind too. The fast-changing essence of many of the plant species used means that these perennial plantings are subject to rapid change, even degradation, over time as some of the most desirable and favourite species are so short-lived (Achillea and Echinacea for example).

I think the Wood and Shrubland archetype is the most likely to resonate with those seeking to create a garden, yet the ones of great importance to me, in a European and specifically coastal Southern England context, is that of the unmentioned Mediterranean or Arid-Mountainous archetypes. Whilst some areas of the Mediterranean clearly fit the Wood & Shrubland archetype (ie broadleaf and evergreen woodlands and Maquis), others such as Garigue, Salt Marshes and Rocky Shorelines, do not. I think this range and essence adds up to its own unique archetype. Arid-Mountainous too is quite distinct (although again with areas that fall into the realm of other archetypes), yet gives us wonderful, tough plants like Perovskia. The Dutch biologist Brian Kabbes has done much to inspire and educate us with his exploration of plants in Kyrgyzstan.

To me, one of the biggest drivers in creating naturalistic planting communities has always been about resilience. To my mind, planting should survive without irrigation, so low water-use plants are attractive. I can’t think of a single garden in the UK that couldn’t survive without irrigation, the desire to use pop-up sprinklers is ridiculous and surely industry-driven. Climate is changing now beyond speeds that Nature can shift plants and ecologies around the globe, so it is something we humans must do if we want a future landscape of any description (oh, and for our own survival). So we have to transmigrate landscapes from one continent to another to keep pace; yes, with all the risks that entails when introducing new species (and it would not be just plants we’d have to relocate). So learning about plant communities and how to build them is a vital skill which this book begins to explore, yet could have gone much further in instructing us on.

In the European context then, archetypes other than grassland/prairie might be more useful and translatable into a garden context. That this book has not covered these is not really surprising but it is a mistake to think that the new language of resilient/natural/sustainable landscapes is dominated by perennials and grasses. This aspect is possibly a trend within the underlying drive for a natural interpretation.

A European version of this book is needed, which could perhaps take it to the next level of design language development. In this respect, inspiration can be drawn from another book, “A Pattern Language” by Christopher Alexander, which although about architecture and space, is also about soul, spirit, context and community, realised through the use of a language of patterns. In a very real way, “Planting in a Post-Wild World” attempts to create an archetype-based design language and is a valuable contribution to that. We just need the language to be global, or to see this book as a regionalised attempt to cross boundaries and develop new thinking.

This is an important book and I recommend it; for all its limitations it shows the way to develop landscapes that are truly new and profound.