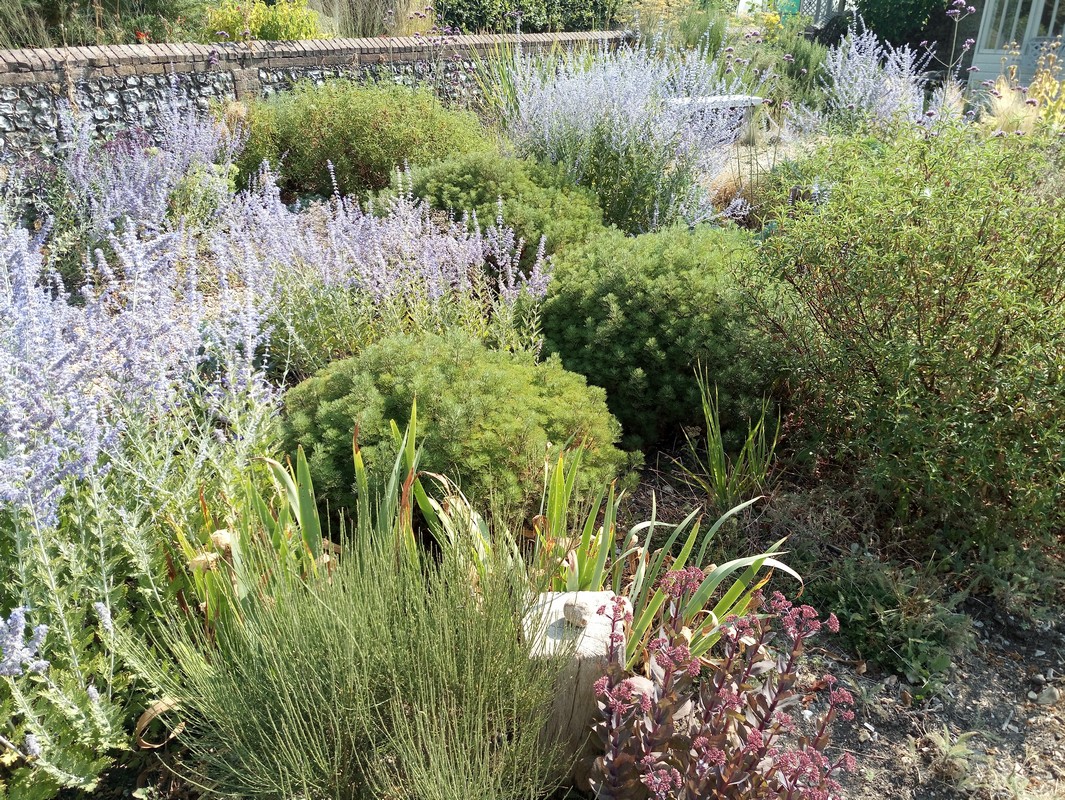 The emergence of the idea of resilient planting is a response to a number of different pressures which all have one underlying cause – climate change. Whatever the cause – and I’ll get on to that later – I see it as the most exciting change to the way we design our gardens and landscapes.

Last year we had one of the hottest summers ever recorded and it serves to heighten awareness of the vulnerability of some plants and garden styles to the increasingly erratic climate we are dealing with in the UK. We seem to swing from one extreme to the other, and this is only likely to get worse. I’ve witnessed a number of stressed plants in my own garden but feel relieved that most have thrived throughout the heat, without any watering on my part. this is down to soil, drainage, micro-climate and above all, plant choice.

We garden on an alluvial coastal plain, and are fortunate to have a very free-draining soil overlying a clay substrate.  It gives us fertile soil, great drainage and a moist sub-strata within the reach of most plants (many areas around us are of much heavier clay).  A large section of our front area used to be a paddock with a rubble driveway and this now forms the basis of much of my dry garden.  Some rubble was removed and topsoil added, but a lot of areas are still rubble-strewn, not unlike some rocky soils.  The down side of all this is super-fertility and a soil filled with weed seeds, bindweed and couch.  To be honest, I’d have preferred a poorer soil.

When thinking of resilient planting, we have to match our plant type to the environment; we also have to think, long-term, of how our environment might change in the coming years.  This is not so important when dealing with short-lived plants such as herbs, sub-shrubs and perennials, but is super important when dealing with long-term structures, especially trees. This is doubly true when we look at the potentially disastrous effects of imported pests and diseases that we are having to content with.  Climate change, especially milder winters, mean that exotic pests are happily making a home here and wreaking an unintentional devastation to trees such as our native ash and even oak.

No-one can say exactly which way our climate will go as the world hots up; we know we (in the UK) will always be maritime, because that can’t change, but as the Jet stream (wind currents) varies and the Gulf stream (water currents) weakens, we don’t really know what kind of climate we’ll end up with.  We can only plan for extremes, and select our planting choices with that in mind.  In this respect, the “new perennial” or “naturalistic” planting isn’t necessarily going to be the toughest choice as they come from a continental climate which generally have hot summers and very cold winters.  Prairie plants tend to get out-competed here with our mild winters and grasses and forbs that can grow all year round, given mild conditions. The aforementioned fertility (at least in my garden’s case) also doesn’t help as wildflower meadows/prairies tend to have poor soil which helps keep the grasses from assuming dominance. During the heat-stressed weeks, I noticed that where I have perennials like Echinacea and Veronicastrum (in moister areas than the dry garden), they suffered from the lack of water. which resulted in the Veronacastrum flower spikes looking stunted.  for more moisture-demanding planting, sub-surface irrigation using harvested rainwater might become a necessity.

To my mind though, if you need irrigation you’re working with the wrong plant-types, trying to grow plants that can’t naturally cope with the conditions that predominate.  Save your water for the newly planted and the vegetable plot and for this, consider rainwater harvesting, rather than mains.  When selecting plants, see what grows well, both of native and non-native origins and build adaptive micro-ecologies.  Our climate is changing faster than the current ecosystems and ecologies can cope with and we need to do whatever we can to build new planting that is of maximum benefit to local wildlife, as well as ourselves.

It’s an exciting time to be a gardener, for there is no place now for the self-indulgence and nature-control-freakishness of the past. What there is a the possibility of co-creating new ecologies that adapt to changes, halt decline and make our local wildlife vibrant and healthy.

Along the way, we can create the most stunning of gardens!

2 thoughts on “The beauty of resilient planting design”