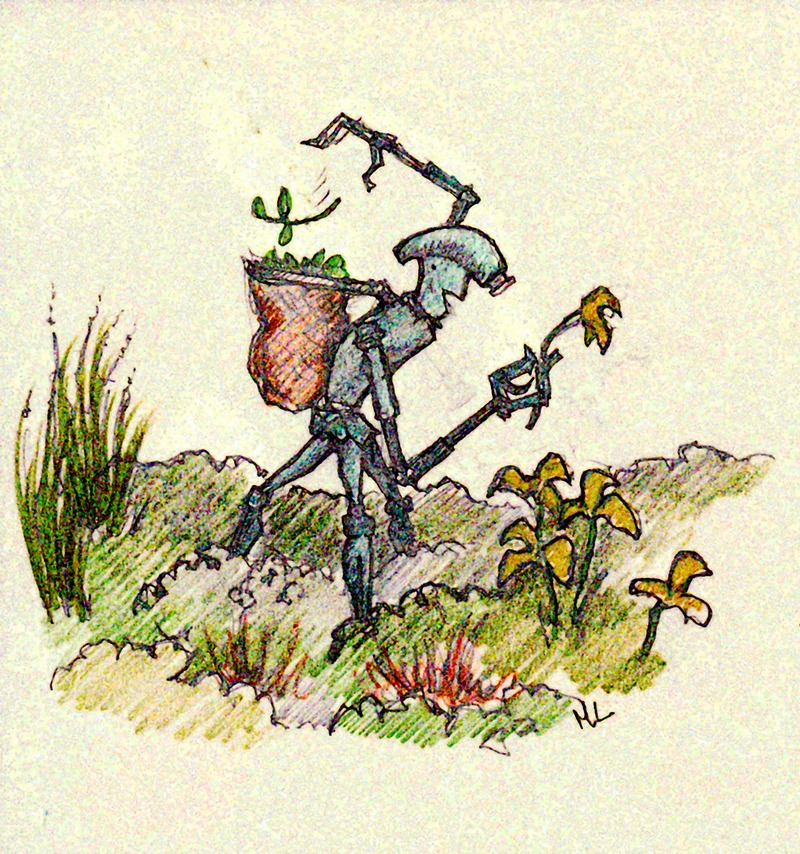 UPDATE September 2022:  Given the increasing urgency of climate change and the overwhelming stresses this will place on our civilisation for the near, medium and long-term future, I now doubt this scenario will ever come about.  A glimpse of what might have been, maybe, had we taken climate seriously and managed to move through that to an era of true abundance, rather than the false illusion that (some of us) live with now.  Enjoy it, nonetheless!

The way in which we design, create, maintain and use urban landscapes is likely to change radically in the next 15 years (in fact, modern society is in for overwhelming change).  Urbanisation, climate change and the rapid rise of technology and artificial intelligence (AI) will see to that. Don’t think that the rate of change will be the same as has occurred in the previous 15 years, for technological growth is on an exponential growth curve, not a linear one.  Cities and systems are becoming smart, connected to the Internet of Things and that is just for starters.  So how will this change the way we design and use our urban landscapes?

Firstly, we know that there is huge movement of populations from rural to urban life, especially in the developing worlds and most markedly in Asia.  This creates huge pressure for new urban infrastructure and this is not always well planned growth, especially in terms of forward thinking to account for future changes.  Nonetheless, it is happening and happening fast.  The UN expects 66% of the world’s population to be urban by 2050, by which time there will be 9bn of us – so 6bn in cities.  Mega-cities have to grow in a way that sustains huge numbers of people.

Secondly, climate change is also occurring at exponential rates, raising the difficulties of living in any environment but with especial problems for mega cities, most of which are in coastal regions and subject to rising sea levels and worsening weather patterns.  Cities are hotter than the surrounding land due to the nature of materials used, whilst heavy rainfall brings flash-flooding. In arid countries, built environments are in danger of becoming too hot for humans to inhabit. Cities will have to take on these challenges, generating micro-climate.

Thirdly, technological change is happening exponentially and this will impact what we do, how we live, how – if – we work and how we tackle the above problems.  Some view the challenges and changes with fear, thinking they will only exacerbate problems.  They could do, anything can be mismanaged (such as a planet) for example.  I foresee that technology is actually the only way we are going to get ourselves out of the mess we have created, the only thing that can act on the vast scale needed to re-balance an out-of-kilter Gaia.

When we take these three factors into account, we can see that the future of urban landscapes has to be so much more than the addition of the odd pocket-park here and there.  Landscapes have to mitigate the environmental factors, make huge mega-cities liveable for a population increasingly disconnected from nature and provide meaningful lives in an era when many of us may not work in the way we are used to.

How will cities become smart and use this to better the environment?  If we are looking to increase the amount of urban landscaping significantly, then the first issue to tackle is cost of maintenance.  No one wants to pay for maintenance and often, no one does.  How many planted landscapes do you see smothered in weeds, wrecking or negating the designed purpose?  Or municipal plantings and car-parks where plants inevitably die and are never replaced, leaving huge gaps.  Shrubs hedge trimmed into amorphous shapes because that’s the quickest way to “maintain” them.  It’s a poor standard and it’s all we’re going to get – no-one is going to pay for trained horticulturalists to do something better.

Yet there is an interesting possibility – automation is likely to remove nearly 50% of jobs in the next decade, especially low-skilled or repetitive ones.  In the landscape trade, there are already semi-autonomous strimmers and grass-cutters on the market, how long before we have horticultural robots maintaining our landscapes?  All the technology is already here, prices are falling and an uplink to an AI would identify every weed known, give the correct procedures, know how and when to prune every plant in common cultivation. Robots would work long hours without tea breaks!  If basic maintenance getters a lot cheaper, we can have more landscape and such robots would be cheaper, eventually.  Living walls would be a prime candidate, with a simple maintenance cradle (much like a 3D printer head) that crosses the wall with a maintenance bot on it.  I’ve seen so many potential living wall projects fall at the maintenance-cost hurdle.  In such a scenario, displaced maintenance crew can retrain as bot-supervisors or true horticulturalist for private clients.

We’re going to have to do more than just make maintenance affordable; rather, that is the factor that releases the possibility to do more urban landscaping.  Many of the elements we need to put in place are already in existence and being used, but we need to join the dots and think holistically.  For example, green roofs are seen as a separate trade from green (I prefer living) walls.  Instead, we need to be talking of biological membranes (biomembranes) for buildings, a whole-system concept, where the living skin regulates the internal environment, filters pollution in both directions, dealing with generation of energy, cooling, clean air and water. Living walls that currently use potable water for irrigation when they could be cleaning up the used greywater that all buildings generate is another example.

Systems that provide services that are of consequence to the functioning of a building, street, or neighbourhood need careful management and control, much of which will become automated.  In just the last year, for example, new irrigation controllers have come on the market which not only are connected to you via internet, they also connect to the nearest weather station and adjust their regime according to the conditions.  I use these for living walls; I do not advocate any irrigation for horizontal landscapes in temperate climates.  But things will move beyond this, with AI monitoring ground moisture levels and moving harvested rainwater from one holding system out to another part of the city where it is needed.  And urban farming – especially vertical – will be a large part of mega-city greening, although it might not be on display.  Sophisticated hydroponic systems are springing up in warehouses and roof-top polytunnels all over.  Such food can and should be organic, local, healthy, nutritious.

A smartly connected landscape means we can maximize the benefit it gives to the people who live, work or pass through it.  With the majority of people living in urban mega cities, we have to create an environment that is fit for ultra-dense urban living.  As these metropolis’ grow, people will have less and less daily contact with Nature, which is not good for our deeper wellbeing.  Biophilia is our innate need for contact with the natural world: plants, trees, flowers, insects, sunlight, water, earth.  A concrete jungle is not a substitute for the real thing but we mostly won’t have time to “get out there” and experience wild Nature.

I think inner city pollution will blow over – excuse the pun- in the next 5-10 years as we start a massive switch over to electric transport, most of it driverless.  In fact, drone taxis are already under development and as buildings and living habitats reach skyward we can expect the landscape to move with them.  It will become commonplace to have high-level dronepads – even private ones.  Some people might not even go down to the ground much!  So landscapes and biophilia must come to them.  Fortunately, there is a rash of building-integrated vegetation going on and I see this trend increasing.  Incidentally, if you wanted more good reasons for using bots to maintain planting, imagine working on living walls or trees that are 50 stories up!

As for the wider environment and the looming crisis of climate change, I can only hope that emerging nanotechnologies give us the tools to clean up our act and neutralise the positive feedback loops we are creating.  Scientists are already working on nanotechnologies which capture and convert carbon into useful materials and one day such microscopic machines may roam our land and seas, removing plastics and other dangerous waste.  If this is done at a molecular level, we turn problems into resources.  We’ll be printing our houses (already being tested) compounds made from waste materials but without the current worries of using say, bricks made from recycled plastic which off-gas VOCs.  We can only hope these technologies emerge before it’s too late to save the climate in a state that we can survive in.

So the next 10-15 years are going to see change at an unprecedented rate and it may not all be a smooth ride.  I am excited by it however and think that there is much to be done to ensure that we create new urban environments worthy of habitation and that we take care of all environments and indeed the whole planet.  Smart cities are coming and at their best they could loosen our imaginations and liberate us from a monotonous life of work and stress.  Let’s make that the scenario that happens…

2 thoughts on “The (near) future of urban landscapes”